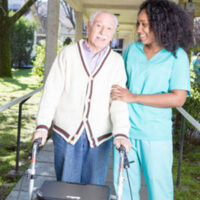 One of the most enjoyable things about spending your retirement in Florida is going outside early in the morning to tend your garden or take a walk or a bike ride by the beach.  Once the clock strikes ten, or sometimes even nine, it is time to go back inside to the air conditioning until sunset.  One would think that the least of the responsibilities of nursing homes and assisted living facilities would be to protect residents from the midday heat in Florida.  In fact, several families have filed lawsuits against Florida nursing homes after residents died from complications of heat stroke that could have been prevented if the facilities had ensured access to air-conditioned areas for the residents.  The best thing you can do to protect yourself from this horrible fate is to contact a Central Florida nursing home planning attorney.

When Hurricane Irma struck Florida in the summer of 2017, Evelyn Bornstein, 96, had recently entered the Darcy Hall of Life Care assisted living facility in West Palm Beach.  She had expected to be healthy enough to return home after a few weeks, since she was recovering from a surgery.  Her son Howard went to visit her three days after the hurricane hit and found her on her deathbed in a room with no air conditioning or fan.  Power outages were widespread after the hurricane, and the nursing home had only one generator, not nearly enough to air condition all the rooms.  In his lawsuit, Howard alleged that, even if there were not enough generators, the nursing home at least had the obligation to move her to a cooler room.

Kay Menard of The Harbor Place at Port St. Lucie

Also in the summer of 2017, Kay Menard, 97, was a resident of the Harbor Place at Port St. Lucie and was well enough to ride her motorized scooter around the grounds of the assisted living facility by herself.  Many mornings, she would ride to the courtyard and read the Bible early in the morning, while the weather was still pleasant.  On July 5, 2017, the key fell out of her scooter on the way to the courtyard, and she tried to pick it up off the ground, but she fell off of the scooter.  The temperature reached 90 degrees by 9:00, but no one found Menard until five hours later.  She had a safety pendant, which she tried to use to call for help, but it only worked inside the building, not even in the facility’s courtyard.  The nursing staff seemed not to notice that she was missing; no one went out to try to find her.  In fact, it was visitors approaching the building in order to visit another resident that found Menard lying outside in the heat.  By that time, she was unconscious, and her body temperature was 105 degrees.  She never regained her health and died three months later.  In 2019, her family won a $6 million wrongful death lawsuit against the nursing home.

A Clearwater nursing home planning lawyer will help you avoid nursing homes that fail to protect you from the elements.  Contact William Rambaum for a consultation on your case.