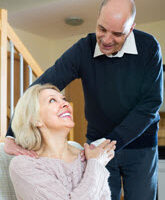 It is hard to talk frankly with your family about the possibility of you becoming too ill to care for yourself and make decisions.  It is even worse, though, if you don’t talk about it.  Too many elderly people in reasonably good health have had their decision-making power taken away from them when the courts declared them incapacitated.  Losing the right to be treated as a legally competent adult is hard enough, but if someone else is going to have the right to make decisions on your behalf, it should at least be someone you trust, someone who has your best interest in mind and always has.  Even the most qualified and most compassionate professional guardian is still a stranger, and that is only the good professional guardians.  Recently, the news has been full of stories about the flaws of Florida’s elder guardianship system and the ordeal of the elderly people declared legally incapacitated and left vulnerable to the whims and sometimes outright malicious actions of guardians.  To protect yourself from the possibility of being placed in the care of an unscrupulous guardian, contact a Florida guardianship lawyer.

What Does a Guardian Do?

An elder guardian has the legal right to make decisions on behalf of an adult who, because of ill health, cannot make decisions for himself or herself.  That means that, when a court declares you incapacitated and appoints a guardian for you, the guardian has control over your finances, healthcare decisions, and to some extent even over your relationship with your family.  The responsibilities of a legal guardian of an adult are similar to the responsibilities of an adult who has legal custody of a child.

The Scary Truth About Guardianship in Florida

Having a trusted person make decisions for you when you are ill does not sound so bad, but so many things can go wrong in the guardianship process.  Whereas in other states, the evaluation must be done by a physician specializing in the health condition affecting the elderly person, Florida has much looser rules.  The evaluation panel has three members, only one of whom must be a physician.  Imagine if the petitioner alleges that you are suffering from Alzheimer’s disease, and your case is evaluated by a gastroenterologist and two people with no medical training whatsoever.  The only qualification for being a professional guardian is a 40-hour training course; besides that course, your guardian might have no idea how to take good care of you and your finances.  Furthermore, the guardianship system is rife with conflicts of interest among guardians and the judges and lawyers who work with them.  Worst of all, professional guardians get paid out of your estate.  It’s not hard to find horror stories about corrupt professional guardians who enriched themselves through elder abuse.

How to Protect Yourself

Your best protection is to plan ahead.  Decide who you want to be your guardian in the event that you need one.  Let that person know, and put it in writing.  Whether you choose a family member or a lawyer as your guardian, you should talk to an elder law attorney about formalizing your plans.

Start working with an elder law attorney now so that you can avoid getting caught up in a guardianship nightmare in the future.  Contact Clearwater guardianship lawyer William Rambaum to discuss your questions.