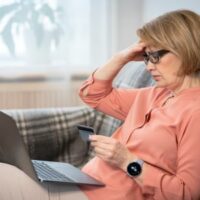 The COVID-19 pandemic was disruptive to everyone, but how well people handled the disruption tended to be correlated with how much at home they feel on the Internet.  Young professionals snickered at the awkwardness of Baby Boomers during Zoom meetings, those silly Baby Boomers who positioned their computer camera to give a clear view of the insides of their nostrils and who thought that the giraffe emoji represented the word “giraffe.”  With even more legal and financial transactions taking place online than before the pandemic, the pre-Internet generation found itself even more vulnerable to fraud.  In fact, some scammers were able to forge the electronic signatures of Florida seniors and then use those forged signatures to gain access to the seniors’ property.  If someone defrauded you out of money or property during the pandemic, by forging your signature or through some other means, contact a Central Florida elder law attorney.

In 1987, Shirley Gibson inherited a vacant lot in Coconut Grove, the oldest continuously inhabited neighborhood of Miami, from her father Clarence when he died.  The land had belonged to her family since the early 20th century when her grandfather, who immigrated to Florida from the Bahamas in 104, bought it.  Every year, she went to a county office in person to pay property taxes on the land.  In 2020, she was one of the last people to visit the office before it closed for the pandemic, and in 2021, she was one of the first people to visit it after it reopened.  During her 2021 visit, she was shocked to find out that the lot had been sold, because she had never authorized the sale and certainly had not received any money for it.

It turned out that during the pandemic, a group of conspirators had forged her signature on a quitclaim deed, authorizing the sale of the property.  Investigators were able to identify Otis Lathen Powell as a participant in the scheme when a Chase Bank surveillance video showed him depositing a check equivalent to the amount someone pretending to be Gibson had received for the sale, after closing costs had been paid.  Powell currently faces criminal charges for his role in the scheme, as do Shantel Vennissa Chang and Jason Webley, Sr.  The investigation revealed that the conspirators had also listed another Coconut Grove property belonging to Gibson for sale on Zillow, but her lawyer notified the real estate agent of the fraud, and the agent took the listing down quickly.  Gibson also got the title to her other property returned to her.

Fraud is not just for faux Nigerian princes sweet-talking old ladies over email anymore; a Clearwater elder law attorney can help you recover assets stolen from you through any type of scam involving electronic documents and can help you keep your financial information secure.  Contact William Rambaum for help with your case.